Champagne in a Crystal Glass, and How to Handle Liquids IOR

So I finally got my AC fixed. Installed 64bit Ubuntu on my blender machine, and 64bit Blender. Things feel smoother, but it likes to crash. So I had spent all of yesterday working on this scene, and most of today. Yesterday, was more or less trying out blender in 64bit to see what it could do more. Not much, but it does seem to respond faster.

I just wanted to post a quick sample of where I got with the wedding table scene. It's not complete, but I'll give some notes of what I was trying for.

I've got the two champagne glasses with champagne in them. Some atmosphere, and on a purple table.

One thing you'll notice is the odd aspect ratio. I wanted to play with some higher resolution but wanted to keep a video format for when I animate this scene. So I looked at the Red Camera  specs on Wikipedia, Red is the best digital camera (as far as I have heard) being used for up to 5k professional video. This was 4.5k, 2.33:1 Aspect Ratio, X: 4480 Y: 1920, for the sample I rendered at 50%.

I gave the scene some Depth of Field, and I turned up the Gaussian blur because I wanted to give the cheese cloth effect, that really isn't strong.

I learned something recently also, how to properly put a liquid in a glass.

You have two objects, the glass and the liquid: 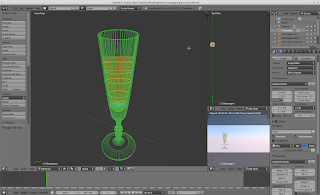 The glass has it's own material, I set the IOR at 1.7 for Lead Crystal.

There is a mathematical way to calculate this IOR problem, and for cycles, right now you need to do it this way. For another unbiased render, luxrender, it does it for you. Doing this fixes some things with refraction and other light related issues going through the glass and the liquid. Where if you were using a more powerful and harder light you'd see the issues in the caustics. I didn't actually do the math for the two materials, but this looked about right. It's basically the difference between the two materials is what you change the liquid to glass IOR to.

I still would like to create a ring for the scene, maybe something for it to sit on or in. Some camera motion, and I will be using a particle system to create bubbles in the champagne.

I'll upload the scene shortly, if you'd like to take a closer inspection of it, as it is.
Austere Grim
Posted by Unknown at 7:08 PM