So after a long few days, trying to get this ring modeled, I finally came out with a fairly good model. I learned quite a bit about modeling an object with this. I'm not going to go into too much detail about the process of making the ring in this post, but I will try to write something up over the weekend.


I will however show the ring, and the scene with the ring in it, after the break.

Here's the close up of the ring, after spending 3 days modeling it.

The diamonds were actually a collection from blendswap, thanks to BroadStu, which included the materials for "light bending."

I will admit the ring itself has some poor low poly showing, but this is fine for the scene as it's not going to be a close up on the ring. I was wanting to do some more smoothing to it, but it doesn't seem worth it right now.

As you can see the ring is small in the scene, and for now it's just sitting on the table. I am planning on putting it in a box, or a pillow along with a simpler "his" ring. 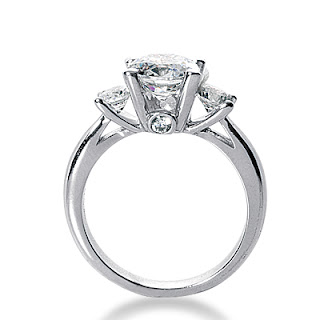 Here is the ring I modeled it after, which I thought was a beautiful ring, and fairly simple. It has 3 small diamonds and a large center one.

As I mentioned I had a difficult time with the ring, mainly with trying to figure out how the fingers that hold the diamond in place fit. I also had difficulty with modeling the fingers. I realized I had to work on each piece one at a time, mirroring the fingers, subdividing the object, and using a simple deform modifier to deform them the way I wanted. It's still not perfect, but it's close enough for what I wanted.

I used a mirror modifier, for almost all of the ring itself, which was a torus cut in half, and the top fingers were cut and moved. Added the separate fingers that hold the diamonds in place, also mirror modified, then subdivided, and sculpted. Using a simple deform to bend the outer most fingers just a bit, after I was done I realized I could have done a better job, but I left it as it is.

I pulled the objects from the diamond kit, put them in their places, and joined all the objects together.

As I have a packed weekend, I don't plan on working more on this till Monday, where I will work on a bubble particle system in the champagne, a hill or mountain range in the background, and "his" ring, and a pillow or something for the rings to sit on.

Oh, and to show my first attempt at sculpting the ring:

It was a struggle.

I'll post more about this as I work on it, so till next week.