After helping out a guy on YouTube, having an issue with a scene he created, I decided to play around with this blend file, and log some more hours in the fluid physics sim.

He was having some issues with fluids disappearing from his scene, after leaving a square pipe and hitting aquarium floor that he had set up.

It took me a few tries to finally realize what was happening...

There's an option in the domain, called "particle generation", this doesn't really create particles that are usable, but they appear to give a more splashy fluid effect. What it actually does is when fluids lose enough surface tension, they break apart, these broken apart pieces are now particles to the fluid simulator. The quirky part of it, once these parts are particles, they dissolve when they hit a surface or come to rest. (This is probably because of the requirement of the surface subdivision of 2 or greater.)

Along with a few other issues, such as using "shell" for his obstacle's volume init. Where using shell with large surface area of faces (or few edges), will allow fluid to freely flow out of the obstacle. Some surface subdivisions, helps out on that. 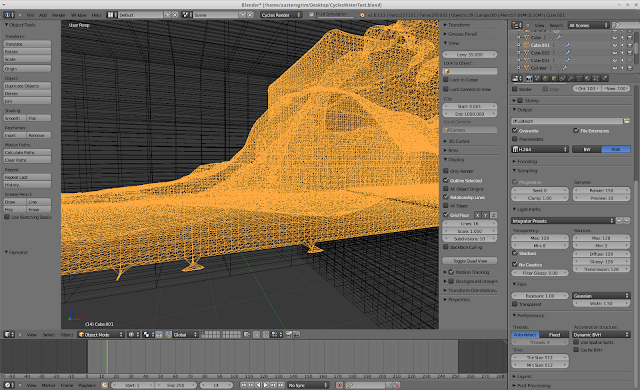 Even with surface subdivision, and "volume" and "shell" volume inits, under higher resolution domains, fluids can still leak out. For this bake I don't care about leaks, I'm just trying to get rid of the next problem. The caterpillar effect on the fluid that is "rolling" down the curved surface. I started to think about it.

The domain memory is 590mb at 350 resolution, 600+ is past 2gigs. If I merely doubled the resolution just to get those caterpillar effect smaller (700) I'd be hitting near 4gig, if not crashing blender all together.

So I'm in a bind, how do I make this effect go away without killing blender?

I can't do much to the curved surface, I've already subdivided it enough to where it's smaller than the resolution. I can't make the domain much smaller, because then the aquarium would be pointless.

So for right now, unless the domain can have a higher resolution (~1024, 13gig reported), I'd just remove the curved surfaces. Or replace it with a flat object.

I'd like to share the final render that I came up with at about 600+ resolution, but it's not my work, so in all fairness, the guy who created it can do with it as he pleases. Also there isn't much to it, other than the cycles materials that he set up that are nice to see.

I'll still play with the scene, and see if I can resolve the caterpillar effect, but it's not looking good. If you have a tip or solution, let me know; I'll be glad to post it, and try it out.
Posted by Unknown at 9:24 PM